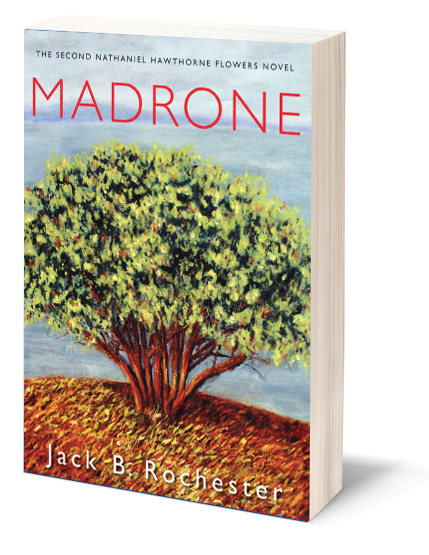 I’ve been in love with Santa Cruz ever since the first time I visited, so Madrone had to be set here. All these years later, I still have my hand-made coffee cup from Santa Cruz Pottery.

The University of California at Santa Cruz opened its doors in the mid-1960s as an experimental college. Stir together student life at SC with mystical redwood fairy rings, surfing, the enigmatic madrone, a blossoming romance between Nathaniel Hawthorne Flowers and Jane Chandler – how could I not set my second novel here? I love this story. It’s fun, sexy, intense and laced with stories of people venturing in the slipstreams and dream viaducts of Van Morrison’s songs on “Astral Weeks,” his best album ever. Oh, did I mention surfing?

“Jack Rochester’s earlier novel, Wild Blue Yonder, succeeds admirably, but in Madrone he achieves mastery. It’s a focused story that keeps building to a satisfying conclusion, giving us a memorable view of life styles in the 1960s, including that of the Haight-Ashbury. It conveys just how young people of the time thought and felt. Realistic as it is, it surprises with scenes of wonder: a visit to Elfland, the discovery of a madrone tree with its colossal power, an acid trip while watching the moon landing. Its love scenes are tender yet torrid. I don’t know how to fijne-tune this website, but rate the book four-and-a-half stars, only half a star below Anna Karenina and The Great Gatsby.” ~ Joseph Kennedy

Click here for more reviews or to purchase your own copy.