Can fiction become real? In Bridge Across the Ocean, Jack B. Rochester imagined The Spinner, a compact high-tech bicycle drive which produces and stores its own energy from pedaling. Pragmatc Innovation, a product development consultancy in Somerville, Massachusetts, certainly thinks it’s possible. After all, the communications satellite was proposed first by science-fiction writer Arthur C. Clarke in 1945.

Daniel Chu, Pragmatic’s founder and principal, says his firm’s motto is “Thoughtful product development, from napkin notes to a pallet-full of product.” He and his firm have had a string of innovation success stories, ranging from the Light Phone 2, a radical cellphone design, to Anda, an electronic sensing pollution/COVID mask. Now Daniel wants to take on the challenge of a battery-less electric bicycle.

“I read Jack Rochester’s novel, Bridge Across the Ocean, and was intrigued by his idea for the Spinner bicycle drive. It’s actually a brilliant concept. Electric bikes are clunky and heavy and only useful as long as the battery lasts. The Spinner has none of those issues. And it solves one of the biggest problems in cycling, getting that extra energy spurt when the rider needs it.”

In Rochester’s novel, four MIT students and cyclists become friends and form Smithworks, their own custom bike manufacturing company. Taiwanese Shieh-Seng “Luke” Lin, the high-tech partner, devises the Spinner. The Smithworks partners pitch in; they believe the Spinner will lead to the most revolutionary bike ever, but they need partners. Luke involves three Taiwanese companies—the largest bikemaker in the world, a microchip fabricator, and a ceramics foundry—to create one of the most unique and innovative business partnerships of the 21st century.

Sadly, before Luke can bring all four businesses to the negotiating table, while cycling he is tragically killed in a hit-and-run. The three remaining partners must carry on without him.

“Taiwan has leadership in all these technologies,” says Chu, who worked in China for ten years before establishing Pragmatc in his home country, the United States. “Even though Jack probably thought the Spinner was just an interesting idea, I saw the real-world possibilities. The innovative ceramic flywheel assembly bolts on in place of the existing rear derailleur. The system captures energy during braking and downhill coasting. The innovation extends to the drive train, replacing a metal chain with a reinforced belt to reduce friction and energy loss.

“A good electric bike costs two to four thousand dollars,” he continues. “Giant manufactures Taiwan’s YouBikes for about NT10,000, or $330, per bike. Let’s say the drive train is an OEM and costs about $200, so the bike at cost is about $550 and sells for $699. I estimate the cost of the Spinner drive train at scale, including replacing the front crankset, at about $120. That $80 savings represents a significant cost-of-goods saving, and the Spinner’s practically maintenance-free.” 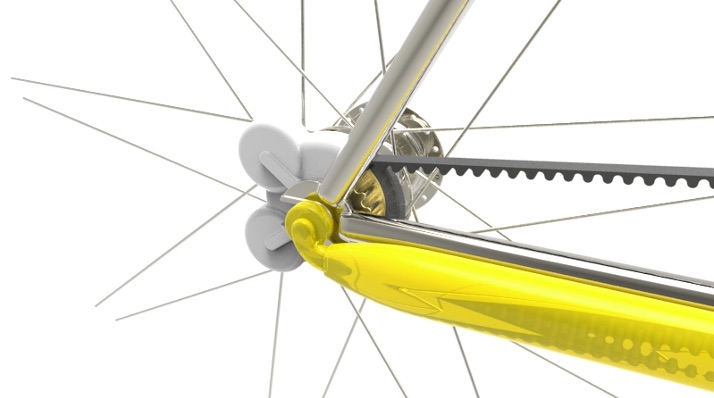 Pragmatc’s studio-lab is abundant with modern fabrication tools and with their experience working with numerous types of manufacturers, the Spinner can progress from a 3D-printed prototype to production.

A Giant Toughroad bike leans against a nearby wall, stripped of its conventional drive train, with fittings to attach the Spinner ready and waiting.

“Now all we need is that first Spinner prototype to test it,” says Daniel.

One Hurricane After Another