Hemingway may have started it, but Chandler defined it. Then along came Lee Child.

Jack Reacher. What’s not to like about Lee Child’s 26 novels about this iconic character? Sure, the most recent books pale a bit compared to the earlier works, but how long could we expect Child to keep this up? Writing, IMO, evolves on a bell curve: up to an apogee, then down. Give the guy a break.

Meanwhile, we have a stunning new Amazon video series, “Reacher,” which begins in exactly the right place–with the very first Reacher novel, Killing Floor, a deep and wide story made better on-screen with Alan Ritchson as Jack Reacher and Willa Fitzgerald playing the Margrave, Georgia, cop whose given name is Roscoe. Needless to say, the diminutive Tom Cruise (5’7”), attempting to portray Reacher in the two full-length movies, has been completely overshadowed by Ritchson (even though he’s only 6’2”, not 6’5”). 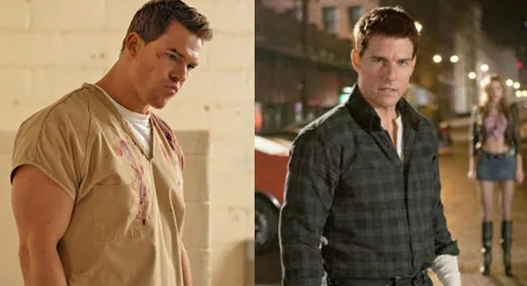 So we’re back in the saddle, so to speak. Now, with the last two Reacher novels (The Sentinel and Better Off Dead) c-authored by Lee Child’s brother, Andrew, we’ll just have to see how things go with #27 (due out October 2022).

Since Dick Hill ceased narrating Reacher novels I’ve listened to a few as audiobooks, made far more enjoyable by Scott Brick’s voiceover. But I remember the stories better when I read them, so I recently decided to collect every one of the Jack Reacher novels, including the short story collection No Middle Name. I already had a number of them, but dropped by my local used-book shop to see what absences  could be filled on my bookshelf, then followed up by shopping on a favorite online bookstore for the rest. I got ‘em, every one.

Fistfuls of Lee Child books, I decided to read the short story collection. When I got to the end, there was a first-chapter excerpt from The Midnight Line, which I had previously read, then decided to re-read the entire novel. One thing I recalled enjoying was that it was set in Rapid City, South Dakota, and eastern Wyoming, both places where I’d grown up. Re-reading brought back a lot of memories, more so of the area around Laramie, Wyoming, than Rapid City, not due to memory lapses but to the descriptions in the novel which remained stubbornly vague (Yo, Lee? You actually went there to do the research, didn’t cha?).

But for all that, the novel dragged for me. A LOT of superfluous detail, often repetitive, which didn’t involve me more deeply in the plot, which was quite engaging. By my rough count, Midnight is about 120,000 words. Looong. The length issue was, for me, offset by the compassion issue: Reacher’s core humanistic values, tightly coupled with his concern for his brothers and sisters who served in the US Army. What to a non-military person might seem insignificant, trivial, or simply not of any interest, becomes for Reacher a passionate search for a person and what may or may not have happened to them. Jack Reacher looks out for his own, and that “own” transcends race, color, gender, time, and pretty much any other intransigence.

Yet what was, and remains, fascinating to me is Lee Child’s knowledge and characterization of Reacher as a soldier, a man of honor, and his military values. These ring so true, especially to me as a former member of “the service.” Over the years the author has clearly done his homework, and is to be commended for it. Reacher comes across as a genuine human being, not a stick figure. Combining the Seeker archetype with the strong (in every respect) ex-military officer works very well.

I intend to re-read a few more Reacher novels as I await #27. Just as I eagerly look forward to season 2 of the Amazon “Reacher” series. Who knows? The TV series could be a shot in the arm for Lee Child. Following in the formidable footsteps of Alfred Hitchcock, Child does a cameo in the last episode. Watch closely; it’s great. No way I’m giving up on this guy.

The Discovery of Thomas Perry

The Lost Chapter of Bridge Across the Ocean