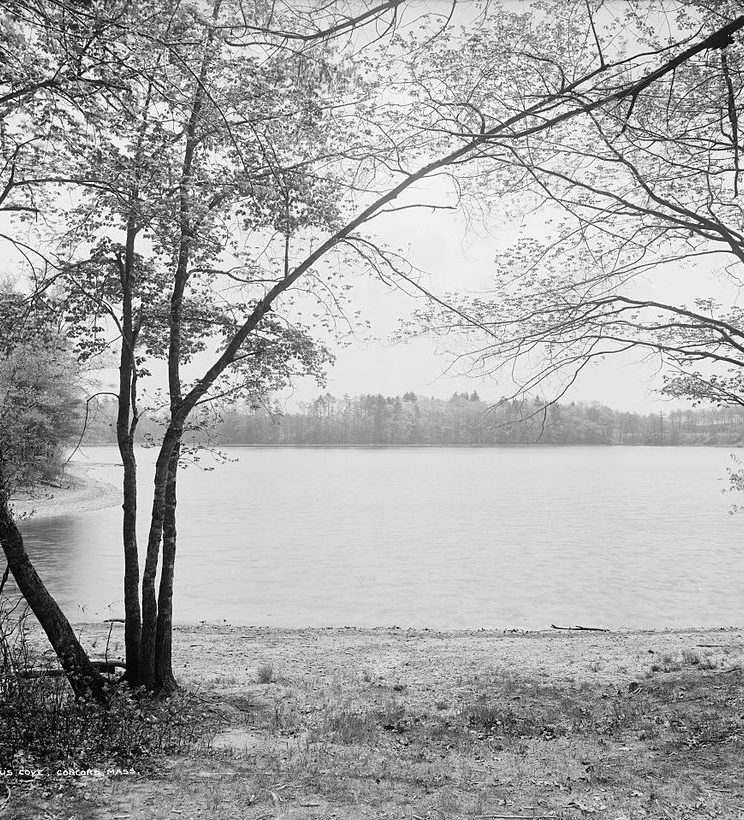 I’m thumbing through my 1950 Modern Library copy of Henry David Thoreau’s Walden and Other Writings when a business card falls out. It reads “Booklady Inc., Used and Rare Books,’ in Littleton, New Hampshire. Obviously where I obviously bought this volume some years ago; there is no website or email address on the card.

It isn’t my first copy of Walden, not by a long shot. I still have a spiral notebook from my teenage years in which I penned [yes, from a fountain pen filled with blue ink] my favorite passages and sayings. But of course the one everyone knows is “Simplicity, Simplicity, Simplicity.” Advice which remains as sound as when the man wrote it some 160-odd years ago, yet ever more difficult to embrace.

When I moved to Boston from San Francisco in 1980, the very first thing I did was visit Walden Pond, in Concord. It was winter and a crusty rime of ice and snow lay upon the pond and the land. Quite cold, I trudged the path to the site of Thoreau’s cabin. Remembered today only by a few stones describing the ten-foot by fifteen foot plot, this was where he lived for two years, two months, and two days. And wrote, but not Walden. Nope, he didn’t. He wrote A Week on the Concord and Merrimack Rivers, IMO a more interesting story. Walden came later. But it was here I paused, knelt, and gave thanks to the spirit of this truth-seeking and -speaking writer.

Over the years, I’ve taken fellow writers to visit Walden Pond. I’ve watched the surrounding landscape change to accommodate the public: sunbathers, picnickers, bookworms, Frisbee-caching dogs, romantics, souvenir-shoppers. A colleague recently visited from Toronto and wanted to see Thoreau’s pond and cabin site. We stopped, took some photos with our phones, then continued all the way round the pond, passing dozens of people enjoying an uncommonly nice day. I told her how Don Henley had rescued Walden Woods from real estate development. We hummed a few Eagles songs in gratitude. Back where we started from, we crossed Route 126 to the big new Visitor Center and souvenir shop in which, to her credit, she had little curiosity.

It’s interesting to see what changes occur in living and which don’t. Do only simple things remain unchanged? Is it possible to recapture our intellectual and spiritual innocence by renouncing the relentless onslaught of technological change and cling to simplicity? Tracy Kidder wrote a fine book back in the early ‘90s about technology and a programmer who, fed up and disgusted with how computers had taken over his life, left a message on his screen one morning for all his colleagues to read: “I’m going to a commune in Vermont and will deal with no unit of time shorter than a season.”

I have, over the intervening decades, wondered many times how that worked out for him.